Why is Arizona so Hot? If you live in Arizona, you may be used to the heat already, but to tourists and visitors, Arizona can be unbearably hot, especially during the summer months. May to September is the hottest month for Arizona. If you’ve often asked yourself “why is it so hot here?” there are many reasons why it gets so hot in this state.

How Hot Is It in Arizona?

Arizona’s Location Contributes to How Hot It Gets

One of the barriers between the state of Arizona and the cool air that flows in from the Pacific Ocean is the Laguna Mountains in California. Without the cool ocean air flowing in, the valley stays hot. And the valley that Phoenix sits in is surrounded by mountains, which leads to an updraft of heat, rain, and clouds that can’t make it inside of the valley. This causes higher air pressure to build up, and this also keeps the clouds away.

There’s constantly high air pressure over Arizona because it’s so hot too. Due to the high pressure, air sinks, which means clouds can’t form. Since there’s no rain, there’s no humidity, but that just means the dry air heats up faster without any humidity to absorb heat.

Arizona is an Urban Heat Island

An Urban Heat Island, or UHI, is an area that experiences consistently higher temperatures than surrounding areas because of buildings that retain heat, and a lot of concrete and asphalt in the area. They are hotter than rural areas, contain a higher population, and demand more energy for utilities like air conditioning.

A great example of a heat island is Phoenix, AZ. A lot of times the heat can cause dust storms and poorer air quality because it stays in a heat bubble. Because of all the development that has happened, there’s less natural vegetation, and vegetation is a natural way to help the temperature stay cooler. The past 30 years have shown that temperatures at night are not as low as they used to be. Nights no longer cool down and this has a lot to do with people building more and more structures and taking up more land.

Arizona is Close to the Equator and has Higher Elevation

Another reason its location makes it so hot is its proximity to the equator. It’s about 2,300 miles from the equator, which is close enough to mean it receives a lot of the sun’s energy, especially at the end of the year. The summer days are longer in the Northern hemisphere and due to the tilt, this means long days in the sun, and more time in the heat. Elevation also plays a role in the temperature. Higher elevations tend to keep places cooler, but lower elevations mean places stay hot. A lot of parts of Arizona sits at low elevation. Phoenix, for example, sits at 1,000 feet, which is pretty low. These two combined make the heat stay all year round in Arizona.

Arizona is a great place to live even if it is hot. And, as a resident of this amazing state, it’s important to know that there are several effective ways you can prevent the heat and keep cool, even during the summer months. At Superior Sun Solutions, we offer various energy-saving window attachments, such as solar screens and retractable awnings, that keep hot temperatures out while maintaining the coolness of your home or patio. If you’re interested in shading solar screens, or retractable awnings for your home or outdoor area, Superior Sun Solutions can help. Our experts have decades of experience in creating and installing our shading solutions. Our specialists know exactly how to keep the heat off you in Arizona, so contact our team today!

Motorized Solar Screens: How They Work and Capacity

How To Clean and Maintain Your Exterior Solar Screens 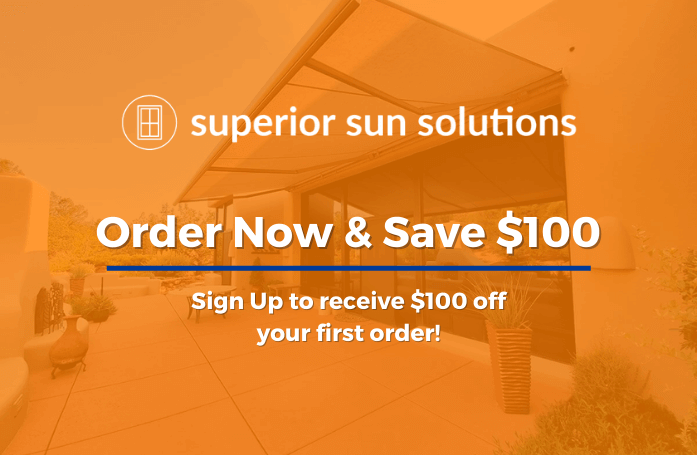